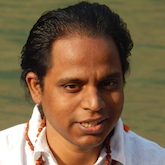 Yogi Ishan is a conscious writer, speaker on Yogic Sciences & Inner Travel, Meditation Guide, Yoga Master, and Mystical Travel Guide with over 10 years of experience. He has led Yoga groups to Ladakh, Rishikesh, Singapore, Hampi and Dharamsala focussing on deep meditation, autonomous Yoga, chanting and other Yogic Kriyas. He has also led Yoga Groups in Singapore, South Africa, France and different parts of India as a Yoga Master.

In the year 2008, Ishan travelled to Pondicherry for the Yoga festival. By now, he had already learnt to perform over 100 asanas, 100 mudras, all kinds of pranayams and Bandhs (locks) – all that happened autonomously. He had already experienced Kundalini energy and its play by now. On one fine day near the Arunachal Parvat, after 8 hours of meditation in open nature at a stretch, he found immense joy, energy, information emanating from the space within. It is here that he decided to make his life fully Yogic.

On the banks of Sangam in the year 2013 sitting under a Vata tree, Ishan went into an even deeper state of meditation realizing a state in which all matter is connected in one sutra – a higher state of realization and consciousness.
Yogi Ishan’s mission is to share Yogic wisdom, tools & techniques openly with seekers through this platform with a pure heart, mind and soul. Being a traveller himself, Ishan also leads Yoga retreats and plans to explore inner self and make people experience the unexplored wonders of nature with a mystical approach. Currently, his retreats are aimed at Central Asia, Russia, South East Asia, China, Nepal & India and he aims to explore the entire planet in the next five years.

The focus of Yogi Ishan’s meditative experiences, realization and teachings is the seed of our creation and sustenance – our consciousness. His experiences have inspired him to share the power hidden within each and every human being, a power which if awakened has the capacity to heal not just the problems related to our mind and body but also to help us connect with our higher and divine self and be able to live our life in the greatest possible way. His workshops comprise of an amalgamation of practices such as fire ceremony, nature rituals, mantras, mudras and life transforming kriyas – all consciousness based.