You are invited to the Hanuman Festival experience — a yogi family reUnion designed to uplift your spirit, nourish your body and remind you of the magic of this life.

Consciousness-seekers from all walks of life will appreciate the master teachers, visionary leaders, soulful musicians and community who come together for 4 transformational days of learning, growth and celebration in the heart of Boulder, Colorado.

Going on our 10th year, we are proud to continue to offer such an enriching, heartfelt gathering for the community. We are devoted to creating safe and sacred space so you can show up, be yourself, and remember who you are.

In addition to world-class yoga instruction, you will find transformational teachings on a variety of topics that will give you the tools and inspiration to cultivate health and happiness on all levels of your life.

Miraculous change happens when people with common interests work together towards common causes. Hanuman Festival’s mission is to practice true SEVA, and give to our local and global community. Each year we select an organization to support through our Seva Fund. All the proceeds of the fund go to support the grassroots efforts of the organization. View our SEVA initiatives here. 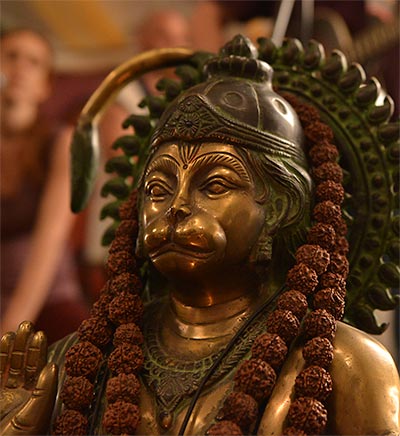 During mythological times, Rama, a king of ancient India, had a problem. The demon king who presided in Sri Lanka, Ravana, had abducted Rama’s wife, Sita. Rama and his troops set out to rescue her from the vile demon. In the ensuing battle Rama’s brother, Laksmana, was severely wounded, and the only way to save him was with an herb that grew exclusively in the Himalayas. It appeared that he would be lost, for who could possibly travel to the Himalayas and back in time to save him?

Hanuman, Rama’s greatest devotee, said he would accomplish this impossible task. He then took one mighty leap that stretched all the way from the south of India to the Himalayas. At that point, he wasn’t sure which herb to pick, and so he carried the entire mountain with him as he made another massive leap back to the battlefield. The healers found the herb in question, and Laksmana’s life was saved.

In that giant leap Hanuman embodied his love for Rama. His intense devotion allowed him to do the impossible, and this is the lesson of Hanuman: Power comes from devotion.

That mighty leap is memorialized in the pose Hanumanasana. This pose asks you not merely to stretch your legs but also to bring true devotion into your practice. Hanumanasana expresses the expansiveness possible when devotion is in the heart—the sense that you can overcome any obstacle when your yearning to help is combined with reverence and respect, as well as an intense and fiery devotion. In Hanumanasana you strive to reach much further than seems humanly possible.

When this attitude is infused into the practice of Hanumanasana, it brings with it the energy to do this magnificent posture. Though Rama himself was an incarnation of the god Vishnu, he wasn’t able to make the giant leap because he was earthbound in a human body. But Hanuman, with his intense devotion to Rama, could make the leap. This story shows that even a god cannot do what a human can when the human has true devotion in the heart. For a devoted soul, nothing is impossible.

Be a part of the beauty that is Hanuman Festival!