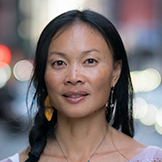 Olivia began her relationship with yoga whilst attending law school at the University of New South Wales in Australia. First a climber and then a yogi she began yoga as part of her curiosity with the art of movement. She naturally gravitated to yoga and has been dedicated to practicing ever since. She thus decided to abandon her legal career and dedicate her time to something she believed would benefit society more than another lawyer! Olivia has had an in depth study of the Ashtanga Vinyasa tradition having first done a traditional apprenticeship in Australia for several years and then furthered her studies when she moved to Boulder in 2006. In the time that she has been in Boulder she has complete several teacher trainings and advanced trainings with Richard Freeman and Mary Taylor and complete a 3rd series teacher training with Tim Miller. She is a yoga and climbing brand Ambassador for Prana, Zeal Optics, Elemental Herbs, Fiveten, Sterling ropes and can be found teaching yoga and climbing all over the world. She can be virtually found on yogaglo.com too!

Olivia’s teachings draw from the knowledge of her own experience as a practitioner and teacher making yoga both accessible and non-intimidating to her students. She also has interest in cultivating the mindfulness that flows from a focused and continuous asana practice. Her teaching style comprises of intuitive hands-on adjustments, energetic alignment and bringing an internal awareness to the self. Olivia feels blessed to have had so many wonderful teachers and hope that she too can cultivate that appreciation of yoga with her students and carry on the thread of the Ashtanga Vinyasa lineage.