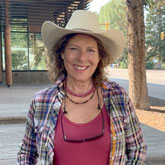 Pamela Tanner Boll, an artist, filmmaker, writer, and activist, is the Founder and CEO of Mystic Artists Film Productions. She directed and produced A Small Good Thing, a film that asks how can we live in a better way; Who Does She Think She Is?, a film about five artists who are mothers; and her current project To Which We Belong highlighting farmers and ranchers who use regenerative practices that help to reverse climate change. Get ready for an exclusive Hanuman screening of To Which We Belong with a post film discussion with Pamela

She is the Co-Executive Producer of Academy Award-winning Born into Brothels, and the Executive Producer of eight documentaries: Connected; In a Dream; Our Summer in Tehran; Strange Powers: Stephin Merritt and the Magnetic Fields; Living in Emergency: Stories of Doctors without Border; She’s Beautiful When She’s Angry; Close to the Fire; E-Team; Teen Press; Obit; and Storm Lake.