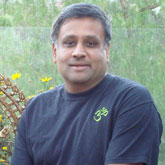 Manoj (people call him a spiritual standup comedian) uses an uniquely entertaining, interactive story telling style using Hindu/Buddhist deities in his workshops to illuminate Bhakti practices as well as deep non dual philosophy. He uses these deity archetypes to help people in their hero’s journey as elucidated by Joseph Campbell and Carl Jung. An Indian-born scientist with a PhD in Chemical engineering from Cornell University, Manoj helps individuals find their archetypes in Hindu/Buddhist Yogic deities and teaches the 5 practices to work with their archetype as a spiritual practice. He has also compiled a book on the symbolisms of these deity archetypes.

Manoj is in the business of story telling to inspire people. He has many you tube videos with deity statues as a compelling media to tell stories. Manoj was interviewed by the Ram Dass foundation for their podcast on “The Deities”.  Manoj, Jyothi and Kurt have created an “online ashram” under Patreon. Under Murtis and Vedanta Youtube Chanel. They have a physical ashram in San Diego called Vivekodayam Ashram where Manoj conducts retreats, all for no charge as Seva. Manoj’s workshops are usually 70% lecture/group exercises, 15% archetypical deity yoga meditations, 10% Mantra chantings and 5% light spiritual stretches.