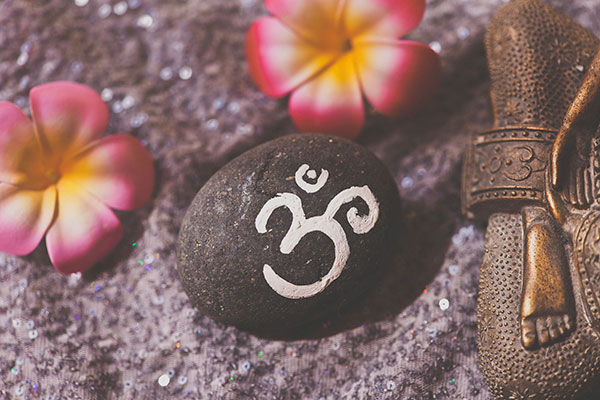 16 Mar Take Your OM to a Whole New Level

Posted at 17:40h in Uncategorized by Yoshi Aono 0 Comments
0 Likes

You probably chant the mantra OM regularly in your yoga classes and/or home practice. But do you have a sense of the rich meaning and symbolism in this not-so-simple two letter word?

In this post I am going to share with you some of that meaning, and how you can work with the mantra in a deeper way on the mat and off.

The Goddess as OM
In Hindu mythology, before the beginning, all was murky chaos and confusion. As the creator Brahma wondered how he could bring order and harmony, he heard the voice of the Goddess say, “With knowledge.” Brahma opened his mouth and the goddess Sarawati emerged — the sound of OM herself. She brought harmony and order to the chaos and confusion, and the universe as we know it was born.

Saraswati is the Goddess of wisdom and music. She symbolizes the refined energy of wisdom; like when we glean a deeper understanding of ourselves through a challenging situation or experience. She plays the veena, a stringed instrument, that represents the harmony that comes through expressing one’s knowledge. When we chant OM, we are invoking the sense of wisdom and harmony that Saraswati brings.

Practice Tip: Chant OM when you feel disharmonious, chaotic or confusing energy, wherever you are (no need for a yoga mat or meditation cushion). Chant the mantra over and over again until you feel a sense of cohesion and harmony in your self and/or in your environment. Try chanting OM with others to invoke harmony and higher wisdom in a relationship or group.

Was OM the Big Bang?
Some say the ancient sound Om is what scientists today refer to as the Big Bang. Roughly 13.7 billion years ago it is said that the Universe was born from the fireball explosion known as the Big Bang. Presently, our known universe is filled with cosmic background radiation, also termed “the afterglow of creation,” that is said to be the vibrational residue of the Big Bang.

Science has shown us what mystics have known all along: vibration is the heart of matter. Everything in the known universe is vibration, and this vibration unifies all of existence.

Since time immemorial, Eastern mystics have experienced this vibrational residue and perceived it spiritually as the primordial sound of creation — they heard OM. Other cultures heard a slightly different sound – AMen. ShalOM.

Practice Tip: When you feel isolated or lonely, chant OM to tap into unity consciousness. No matter how alone you may feel, OM reminds us that we are never alone. We are a part of the whole masterful web of creation. Aligning our personal vibration with the vibration of OM brings us into a felt sense of Oneness and connection.

The 4 Sounds of OM
OM is actually made up of four sounds — A, U, M, silence — and according to the Mandukya Upanishad, symbolizes the four states of consciousness.

U, sounded as if saying “you” without the y, holds the energy of the dreaming state. It relates to Vishnu, the energy of preservation.

Silence — at the end of chanting OM pause and drink in the sound of silence. That is the final “sound” of OM, and symbolizes Oneness or Infinite Consciousness.

As we chant the first 3 sounds of OM we acknowledge the diverse states of consciousness that we experience in human form. As we feel the last sound of silence, we connect to the Transcendental Self that holds all of these states within itself as One.

The symbolism and significance of OM is complex and multidimensional and the sky is the limit in the ways you can deepen in your exploration of this sacred mantra. As you practice working with OM, no doubt your understanding of this powerful sound will grow and the benefits of its use will ripple our into your life and the world.